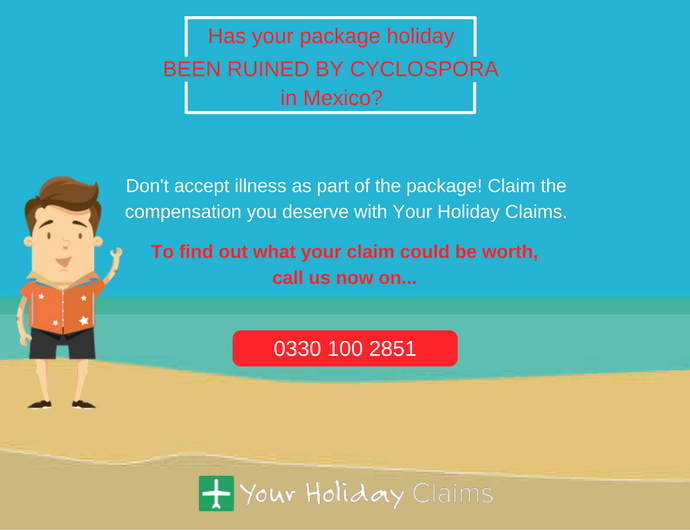 It has become apparent to the legal experts here at YourHolidayClaims that multiple holidaymakers have recently suffered from illness whilst staying at the TUI SENSATORI Resort Azul Mexico.

Has your Mexican package holiday ended in misery because of sickness? If so, and your illness lasted for at least one week, then you may be eligible to make a no win no fee claim for holiday illness compensation!

So if you think you may be entitled to claim, why not call our dedicated holiday illness helpline today on 0330 100 2851.

Alternatively if you would rather, you can also launch your claim with the click of a button by completing our quick and easy online contact form.

Our dedicated travel law team have uncovered numerous online reports, which point towards the possibility of a recent gastric illness outbreak at the TUI SENSATORI Resort Azul Mexico.

A number of disgruntled former visitors of the five star resort have left reviews on the website TripAdvisor, including one frustrated poster who revealed:

âI have just returned back to the U.K. after 10 nights at the SENSATORI Azul [after] spending the last 5 days being cooped up with my daughter and myself being severelyÂ sickÂ & having diarrhoea.

âWe travelled as a party of 3 for my husbands 50th birthday. Unfortunately half way through the week my 6 year old daughter started vomiting. She couldnt hold anything down (fluids) so we called the doctor out which cost $130 just for a call out.

âThis was later ruined as two days later on my husbands 50th birthday I came down with severeÂ sicknessÂ & diarrhoea, slightly worrying as we were due to fly 48 hours later.

âOnce I landed I headed straight to my doctors & provided a sample. He said I [possibly] caught Cyclospora which is rife in some parts of Mexico & clearly the hotel [that] I stayed in.

âI havent eaten in days & [Ive] lost weight [â¦] the cramps have been unbearable. Even my daughter who was onlyÂ sickÂ is still complaining of cramps.

âMy husband now [also] has it since returning back to the U.K. & his doctor has now told him to take time of work (not what you need when you have just come off holiday).

âI hate to leave such a negative review for this hotel but I urge them to really look closer at hygiene and the certain foods [that are] laid out!!â

On top of this, another recent visitor of the TUI promoted resort posted:

âHaving travelled to the Riviera Maya for the last 16 years, staying in various hotels, we thought we would try SENSATORI – wrong decision.

âMy husband sufferedÂ sickness/diarrhoea near the end of our holiday. We managed to self-medicate with Imodium and rehydrating drinks which I always take – just in case, but have never had to use in Mexico – until now.

âWe did report this to our TUI reps, and were informed that there was a problem. Whilst reporting this matter, two other people were reporting two separate cases of the same.

âSince returning home, I too have sufferedÂ sickness/diarrhoea – but at least I’m at home. There is obviously a serious problem in the area where the hotel lies.

âWe would not return to this hotel. There are much better hotels on the Riviera Mayaâ.

Comments from our legal specialist

âThe Riviera Maya region of Mexico is notoriously known for hosting illness outbreaks for sicknesses such as Cyclospora and food poisoning.

âTherefore it is crucial for any holidaymakers that fall ill whilst on holiday in Mexico to know that expert legal assistance is only a phone call or a click away.

If your package holiday has been ruined by illness within the last three years, then contact our team today for more informationâ.

Experts you can trust

The legal specialists have helped an abundance of ill-stricken holidaymakers collectively recover over a million pounds in compensation, and if sickness has spoiled your package holiday we may be able to help you too.

So join the many who have thought back and secured compensation today, by answering a few quick questions regarding your case and starting your claim online.

Or if you would like to discuss the claims process in further detail with one of our knowledgeable legal team members, then you can do just that by calling YHC today on 0330 100 2851.

Notice: Trying to get property 'ID' of non-object in /home2/holidayclaims/3D7OC2L8/htdocs/wp-content/plugins/mfm-schema/inc/schemaoutput.php on line 116
Cyclospora circulating throughout the TUI SENSATORI Resort Azul Mexico