Reports reveal that the Riu Republica is riddled with illness 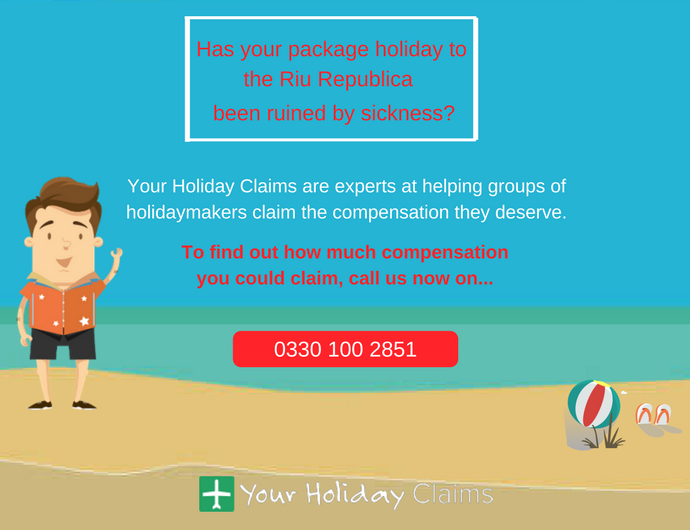 Numerous recent visitors of the Riu Republica have claimed to have returned home disappointed, after succumbing to illness during their stays at the five star hotel.

If you have also had a package holiday to the Dominican Republic which has been devastated by illness, as long ruined holiday has been within the last three years then you may be able to make a claim for holiday illness compensation!

So find out if you are entitled to make a claim today, by calling the dedicated legal experts at YourHolidayClaims on 0330 100 2851 now.

Or if you are unable to talk to our team on the phone right now, you can also get your claim on track by completing our quick and simple online enquiry form.

The travel law team here at YourHolidayClaims have become aware of multiple online reports, which suggest that illness has ruined many holidaymakers highly anticipated visits to the Riu Republica resort.

Those who have complained of being affected by the apparent outbreaks have made their feelings known on TripAdvisor, such as one February 2018 visitor of the five star resort who revealed:

âWe arrived at the Riu Republica on the 12th of Febâ¦It was my husbands birthday.

âHowever just as we were going to dinner he began to shake saying he was cold. He ended up [suffering from a] fever, vomiting and diarrhoea all night.

âWe have travelled to DR every year since 1994 this has never happened before. He was in hospital on IV [and] antibiotics for 36 hours and after release [he] had prescription for 7 days.

âI was quite disappointed when [we] spoke to management and they told me to email [their] head office in Spain.

âI did and they responded [saying] that they could not provide any restitution as no one else had these issues……strange because I just read a review from a group of 11 people the same week as us and all of them had [a] fever, vomiting and diarrhoeaâ.

Unnervingly, this holidaymakers is not alone in having their recent visit to the Riu Republica ruined by sickness. In a review titled âReally disappointing weekâ, another affected holidaymaker posted:

âMy boyfriend became very ill [on] the second night after we arrived so most of his vacation was spent in bed, with stomach issues, headache, chills, etc.

âMy vacation was spent nearly alone because he could not get out of bed. We are guessing it was something he ate because we were barely drinking and were sure not to drink the tap water; he was not ill when we arrived.

âSome of the wait staff [were] very attentive, others less so. However, we were given assistance when my boyfriend needed some medical intervention.

Comments from our travel law expert

âIt is concerning to learn that holidaymakers believe they have fallen victim to illness as a result of something that they have hate whilst staying at the Riu Republica, in Punta Cana.

âThis suggests that food hygiene standards have not been maintained to a suitable level at this resort, and therefore I am worried that even more holidaymakers may have been affected whilst staying here.

âIf your Dominican package holiday has been put to a halt because of illness, then speak to the legal experts here at YourHolidayClaims today to discover if you can make a no win no fee* claim for compensationâ.

Starting your holiday illness claim with the team here at YourHolidayClaims is a quick and easy process.

You can start your claim with the click of a button, by answering a few short questions about your case and staring your claim online.

Or if youd rather, you can also get your claim on track by calling the dedicated YHC holiday illness helpline today on 0330 100 2851.

Notice: Trying to get property 'ID' of non-object in /home2/holidayclaims/3D7OC2L8/htdocs/wp-content/plugins/mfm-schema/inc/schemaoutput.php on line 116
Reports reveal that the Riu Republica is riddled with illness