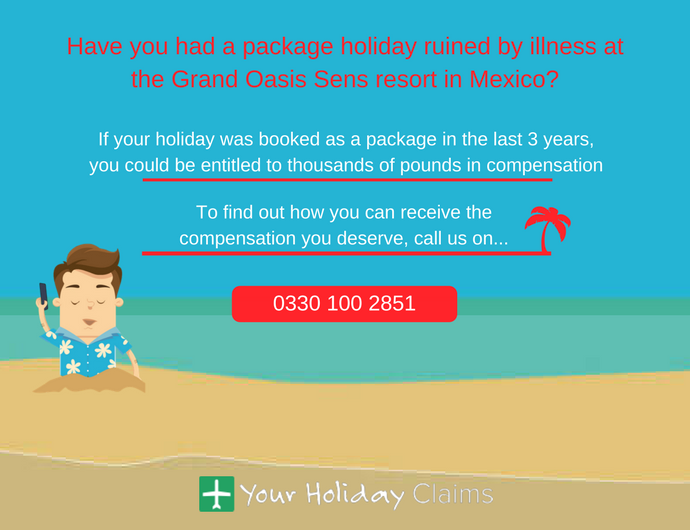 YourHolidayClaims experienced travel law team have turned their attention to a number of online claims, which reveal that numerous holidaymakers have recently fallen victim to illness at the Grand Oasis Sens resort.

If you have had a package holiday to Mexico that has also been ruined by sickness within the last three years, then you could be entitled to thousands of pounds in holiday illness compensation!

So quickly discover whether or not you can launch a claim today, by calling the dedicated YHC holiday illness helpline on 0330 100 2851 now.

Or if you are unable to contact our team over the phone right now, you can also get in touch by simply providing us with a few of your details on our online contact form.

Whilst investigating potential outbreaks of illness which have recently occurred at all-inclusive resorts, the YHC legal team have discovered some unnerving claims that have been made by former visitors of Mexicos Grand Oasis Sens resort.

Holidaymakers to have recently stayed at the Thomas Cook promoted hotel have raised their concerns on the website TripAdvisor, after having had their visits to the four star hotel tainted by stomach sickness.

In a post titled âREAD THIS BEFORE YOU BOOK!!â, one affected holidaymaker revealed:

âThe hotel is SEVERELY understaffed. This is management’s fault.

âGET THIS, in the middle of serving the long line-ups, they have to leave and walk around the resort and beach, picking up the dirty glasses because they don’t have enough. Some days they were out of cups by 11 am!

âThen, if that’s not bad enough, they carry them back, rinse them under the tap and fill them again! DISGUSTING!! It’s no wonder 4 out of the 6 of us gotÂ sickÂ while we were thereâ.

Furthermore other holidaymakers have targeted poor food hygiene at the Grand Oasis Sens as a reason for the illness that they had to endure, including one unhappy poster that commented:

âMy husband and I stayed at this resort for a week at the end of January.

âThere is only one place to eat for breakfast (the Coba buffet) and right off the bat I could tell the food handling of this buffet was poor.

âThe spoons for serving were never changed during the breakfast hour and no one was wiping the pot lids or counters like they do at other resorts.

âI ended up getting VERYÂ sickÂ one day shortly after eating breakfast at the Coba. I was soÂ sickÂ I ended up calling a Doctor as I was afraid of dehydration and a hospital admission.

âI spoke with another Canadian staying at the hotel and she had the same thing as I did about 8 hours earlier. I assume we were bothÂ sickÂ because of the poor food handling and prepâ.

âIt has become transparent to our legal experts that numerous recent guests of Mexicos Grand Oasis Sens resort may have unfortunately have had their visits cut short by sickness.

âMultiple former visitors of the four star resort have revealed a number of breakdowns in hygiene that are completely intolerable at hotels such as this, or in fact at hotels anywhere in the world.

âIf poor hotel hygiene has resulted in you falling ill on holiday for at least seven days, then it is important to remember that expert legal help could only be a phone call or a click away.

âGet in touch with the specialists here at YourHolidayClaims today to see if you can launch a claim todayâ.

Begin the journey to justice now!

The legal team here at YourHolidayClaims are aware how stressful it can be to have a hard earned holiday ruined by illness, which is why we have the process of making a claim as simple for our clients as possible.

So quickly get your hassle free claim on track today, by answering a few quick questions regarding your case and starting your claim online.

Alternatively, if youd rather you can also discuss your case over the phone with one of our knowledgeable travel law team members by calling 0330 100 2851.

Notice: Trying to get property 'ID' of non-object in /home2/holidayclaims/3D7OC2L8/htdocs/wp-content/plugins/mfm-schema/inc/schemaoutput.php on line 116
Grand Oasis Sens sends holidaymakers into meltdown as sickness strikes the Mexican resort