RIU Touareg terror as holidaymaker contracts H. Pylori whilst at the resort 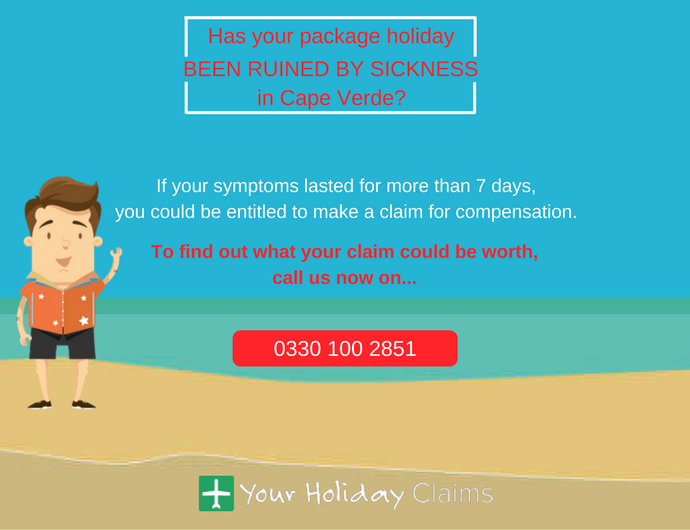 YourHolidayClaims have received an enquiry from a British holidaymaker whos stay at the RIU Touareg, Cape Verde, was ruined by an illness which was later confirmed to be caused by Helicobacter pylori.

If illness has contributed to your Cape Verde catastrophe, then you could potentially receive thousands of pounds in holiday illness compensation!

Or alternatively, you can provide us with a few details on your holiday to start your claim online.

Frustrated guests complain of infection and illness at RIU Touareg

YourHolidayClaims experts are currently assisting a holidaymaker who had to endure severe gastric illness symptoms of diarrhoea and stomach cramps in Cape Verde during his visit to the Boa Vista resort.

Worryingly whilst investigating the issues at the RIU Touareg, YHC experts discovered reports on the website TripAdvisor which revealed that more holidaymakers have been far from pleased with their visit.

One poster who stayed in April 2016 disclosed:

âVery disappointedâ¦The only thing that is 5* about the hotel is the look of the hotel.

âWhen we arrived we [were] greeted by an infestation of moths in the corridor and several dead bugs on the floor of the room.

âThe food was very average and whatever was on offer for lunch was also for dinner the same day.â

Furthermore, another holidaymaker claimed his âwife developed a bad stomach for daysâ and alarmingly that many of his fellow travellers also had âstomach upsetsâ.

Additional online reports also unveil that the food served to guests at the RIU Touareg was often âcoldâ, and that the resort also has problems with cockroaches infesting rooms.

What our Head of Travel Law thinks

âH. Pylori can cause a number of unpleasant symptoms, and can spread quite quickly in resorts such as the RIU Touareg if it is not controlled correctly.

âIt is saddening to learn that holidaymakers breaks are being ruined by illnesses, and my thoughts are with anyone who has been affected by the illness issues that have been present at the RIU Touareg.

âI suggest that anyone affected by illness on holiday seeks the justice they deserve, through speaking to me or any member of my team at YourHolidayClaims by calling us on 0330 100 2851 or by starting your claim onlineâ.

Notice: Trying to get property 'ID' of non-object in /home2/holidayclaims/3D7OC2L8/htdocs/wp-content/plugins/mfm-schema/inc/schemaoutput.php on line 116
RIU Touareg terror as holidaymaker contracts H. Pylori whilst at the resort