âCounting the days to come homeâ: Guests struck by sickness at the Messonghi Beach Hotel 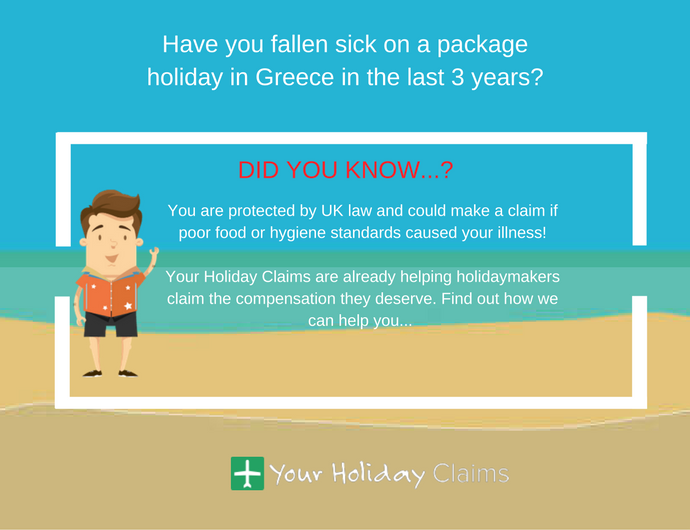 Reviews which have been made by former guests of the Messonghi Beach Hotel in Corfu, Greece, reveal that an outbreak of gastric illness has recently affected numerous guests at the three star resort.

If you have had a package holiday within the last three years that has been ruined by illness, then you may be eligible to launch a claim for holiday illness compensation!

For more information on launching your claim for holiday illness compensation, just answer a few quick questions regarding your case and start your claim online.

Alternatively if you would rather launch your claim by directly speaking to one of our travel law team members, then call YourHolidayClaims now on 0330 100 2851.

Family holidays plagued by sickness at the Messonghi Beach Hotel

The Messonghi Beach Hotel has been subject to reports in the past few weeks, which suggest a gastric illness outbreak is sweeping through the three star resort.

Reviews made by holidaymakers on TripAdvisor disclose the details of the issues at the Corfu hotel, which are reportedly ruining numerous hard earned holidays.

In one of these reviews, a holidaymaker criticises the food and pool hygiene at the Messonghi Beach Hotel before revealing;

âMy daughter was ill for a total of 3 days. Her baby (our granddaughter) was ill for 1 day.

âOn day 5 my third niece was ill, she was ill for 2 days and my wife was ill on our last day, this lasted 3 days.

âThe illness was incredible stomach cramp pains followed by severe vomiting and diarrhoea. My sister in-law asked the maids if there were anybody else sick and they said “LOTS”â.

Furthermore, another August 2017 guest of the Messonghi Beach Hotel was also unimpressed with their holiday, as they disclosed:

âWe were all-inclusive and again the food was never hot, [we] could only eat the soup, and [it] was just slop!

âWe had to eat out the hotels, first night [my] daughter had the ice cream and kids cocktails, next morning [she had a] sickness bug for three days!!

Our Head of Travel laws take

âIt is alarming to hear that children as young as 9 months old have been affected by illness issues at the Messonghi Beach Hotel.

âFor the family involved this would have been a severely stressful period of time, and the thoughts of everyone here at YourHolidayClaims are with those who have been affected by illness at this resort.

âIt is important to remember that if you have been hit by an illness which lasted for at least a week on holiday, then you may be able to secure justice.

âContact our dedicated legal team today to learn more about the benefits of making a claim for compensationâ.

YourHolidayClaims are fully aware of how distressing it can be to have a highly anticipated holiday ruined by illness, which is why we have made the process of making a claim both simple and hassle free.

To discuss your claim directly with one of our knowledgeable legal experts, call our dedicated holiday illness helpline on 0330 100 2851 now.

Or if youre unable to discuss your claim over the phone right now, you can request for a call back at a time that better suits you by starting your claim online.

Notice: Trying to get property 'ID' of non-object in /home2/holidayclaims/3D7OC2L8/htdocs/wp-content/plugins/mfm-schema/inc/schemaoutput.php on line 116
âCounting the days to come homeâ: Guests struck by sickness at the Messonghi Beach Hotel